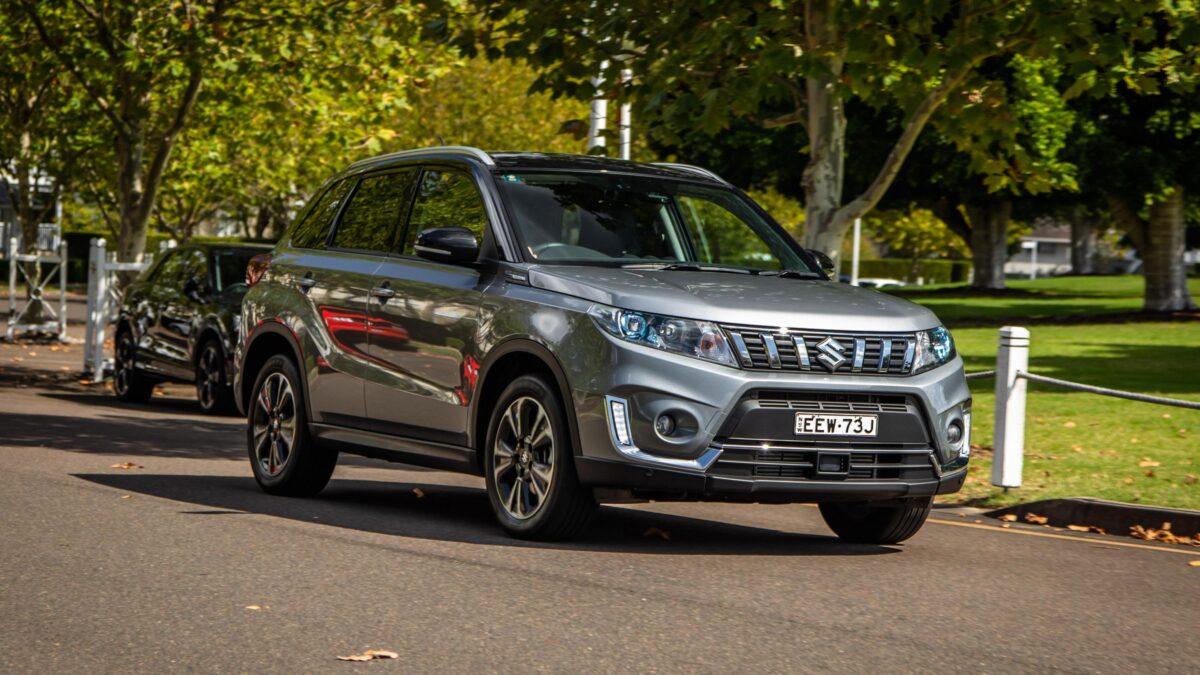 The Vitara is one of the most enduring SUV nameplates in Australia, but has it moved swiftly enough with the times to remain relevant?

Times and expectations change and today’s fourth-generation car brings with it turbo power, a contemporary suite of active safety, and modern must-haves such as smartphone mirroring, though for first two you need to dodge the base version and climb straight into the Turbo.

Let’s face it, if the Suzuki Vitara Turbo is in your crosshairs, then the extra punch its engine offers over the base version is the primary lure (and its fulsome safety fit-out really should be considered a deal-sealer).

What do you get?

It’s fairly cut and dried: the dividend for the Turbo’s extra $5500 investment over the base automatic is largely the addition of the lustier powertrain and the more expansive safety suite.

Inside, the Turbo has manual seating with leather-accented and suede trim, single-zone climate control and a 7.0-inch touchscreen infotainment system with proprietary sat-nav, Apple CarPlay and Android Auto mirroring, plus six-speaker audio that adds a pair of tweeters over the base car.

There’s a single 12-volt outlet and USB port, plus a large analogue clock for a dash of old-school ‘premium’ Japanese nostalgia.

What is the Suzuki Vitara Turbo like on the inside?

The cabin design is fairly austere and workmanlike bar the odd flourish to bring a bit of a lift to the ambience, such as the shiny speckled dash trim and well-presented blend of partial leather and suede trim, the latter creeping into the door trim inserts.

The leather-trimmed wheel and soft-padded dash trim present well, though they barely distract from the sea of very shiny plastic, most conspicuously atop the door trim and around your knees. There’s some hard-wearing honesty to the effect, but little of the cabin aims upmarket.

The console, too, is a featureless array of plastic cubbies that rattle with anything stowed inside, including square cupholders. From the manual seat lever to the monochrome LCD climate control display it’s pretty basic and, neat carpet mats apart, there’s not much to remind that you’ve splurged on the Turbo version.

How does the Suzuki Vitara Turbo drive?

The real trump card in the package is the engine. The little BoosterJet 1.4 is quite energetic, pulling hard from the depths of the rev-range and remaining strong as the tacho needle rises, though there’s enough go in reserve that it’s easy to ride the mid-range torque to maintain handy pace.

The engine is quite raspy under full load, though not to much detriment. And while the auto is hardly the last word in intuitive response, it does get around to plucking the right forward ratio for whatever situation it finds itself in.

The ride and handling balance is acceptable, a mixture of slightly firm ride compliance that gets a bit terse over speed bumps and a bit of wallowing while the suspension settles down, suggesting it’s a little under-damped.

One big plus with Vitara Turbo is that, at  1185kg kerb, there’s not much of it to inhibit its keenness in hooking through a corner or changing direction. And hook it does, though the slightly floaty nature of the suspension does rob it of a sense of certifiable body control and, with it, a touch of fun factor.

This article originally featured on carexpert.com.au and can be viewed here.

Previous
Back to Blog
Next